You know what there's not enough of? Lesbian bands.

I mean sure, we currently have Hunter Valentine, Sick of Sarah and the like, but how about something different?

Check out this great interview we have with the lead singer of Syren, a band originally from the US and who are now stationed in the UK. 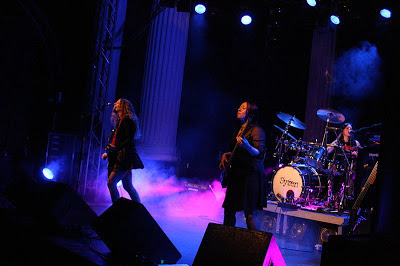 All Things Lesbian: For our readers who haven't heard your music, describe your sound in 5 words or less.
Erin Bennett, lead singer of Syren: Passionate, Lesbian Pop/Rock


ATL: Do you think its important for LGBT musicians to "come out" in today's media and political climates?

EB: That's quite difficult. I think it is important for LGBT people in music to know that they CAN come out but it is still very difficult to build a largely successful career if you do. More artists are coming out as bisexual (such as LadyGaga and Jessie J) and you also get the odd male (Will Young, Adam Lambert) who come out as gay. There are not many 'out' lesbian singers in today's mainstream pop world.

But for every artist that faces the difficulties of publicly coming out it builds a firmer foundation for new artists who want to begin their career as an openly gay/lesbian/bisexual/trans artist. I believe the world's attitude towards homosexuality is slowly changing and music is a perfect way to push that more further forward because everyone loves music, music touches everyone in one way or another. That's what I hope to do as an artist.

ATL: You're based in Scotland but born in Texas. Did you ever perform in Texas? Would you say the
atmosphere/music scene there is different to the UK?

EB: (Laughs) Seems I played all the states but Texas. I'd love to go back one day and do a gig there though. Especially in my home town of Ft. Worth.

The music scenes in the UK and USA are relatively the same. There are tons of hard rock bands and metal bands in both countries and there seems to be a massive folk scene in both countries as well. The states seem to have a bigger Country music scene than the UK, but that's a typically American style of music. However, the live scene in America seems slightly more accessible for bands and artists but I think that's probably because the US is such a massive country. The UK is smaller so the music scene is far more competitive. Truth be told though, I think that breeds better music because you have to be really unique to stand out amongst the thousands of bands that flood the venues around the country.


ATL: Who are some of your musical (and general life) influences?

EB: I was hugely influenced by Heart, Queen, Janis Joplin and Alanis Morrisette. They were so expressive and musically skilled. I wanted to be THAT. But I grew up listening to everything from Motown, The Beatles, Pink Floyd, Led Zeppelin and these days draw huge influence from artists like KD Lang, KT Tunstall, Lissie and The Pierces.

As a general influence, I most admire Benazir Bhutto. She was such a brave and beautiful woman and a real inspiration to women all over the world.


ATL: Some of the proceeds from your music went to UK based charity, Breast Cancer Care. Why? What are some other charities you're in support of?

EB: Back in January 2012 I lost my wife (and Syren drummer) Jo to breast cancer. It was a very rare but aggressive cancer that is very hard to detect until after it metasticizes. (Inflammatory Breast Cancer) I wrote 'Never Give Up The Fight' in her memory and released it in aid of Breast Cancer Care because they had offered Jo so much information and support during her treatment. I went on to win Songwriter of the Year at the 2012 Scottish New Music Awards for that track and have since tried to use it as a way to reach out to women and encourage them to get educated about breast cancer. So many women (as well as men, actually) just don't know enough about how to look out for it.

I'm also a huge supporter of LGBT groups throughout the UK. I have recently been involved with some of Scotland's LGBT groups in small-ish towns. Some LGBT people may feel uncomfortable about coming out in such a tight knit community so I try to help inspire people to feel a bit more confident and safe when they decide to come out.

ATL: Would you be interested in playing at any UK LGBT pride festivals? Do you you have any up and coming gigs that our readers should know about?

EB: I would love to play at Pride Festivals throughout the UK. Syren is now a five piece band and we have already played a couple of LGBT events. We will be playing the McGal Lesbian Festival in Dunfermline, Scotland in late August as well at the Rainbow Kilts Festival in the Scottish Borders in September.
Apart from that we will be performing in Seaton, Exeter in the end of March as part of Hawkwind's 'Hawkeaster' Festival. Any other gigs will be confirmed and listed on our website and facebook pages.

To keep a watchful eye on Syren and their tour dates check out their website (www.syrenband.com) and their Facebook, (Facebook.com/SyrenMusic).
Posted by lezstar at 12:38