Oranges Aren't The Only Fruit

In the past, I've blogged about the more homophobic goings on at my college. However, for once, I have some positive to write about on the gay front.

I was casually strolling past the DVD section in our college library (I was actually about to leave) when what should I see but the movie version of Jeanette Winsterson's Oranges Aren't The Only Fruit.

'Oranges' follows a lesbian girl and her partner who is adopted into a religious family. Obviously, the fact that this DVD even existed in such a close proximity to my own home (clearly ignoring my personal DVD collection) surprised me because in a small town like ours, most people have very old-fashioned views on homosexuals.

The fact that the movie was there for everyone to see - it wasn't pushed to the back, gathering dust, it was actually on the front row! - put a smile on my face and simply inspired me to write this blog.

So whoever put it there or suggested it should be available for rent in a public library, I salute you.

P.s. Since when could you take out DVDs in a library? Surely that is what Blockbuster is for...

Email ThisBlogThis!Share to TwitterShare to FacebookShare to Pinterest
Labels: christianity, gay, lesbian, movies, oranges are not the only fruit, religion

Clementine Ford goes back in the closet...

My life is no longer complete: this week, The L Word actress Clementine Ford claims that she didn't previously come out in an interview with UK magzine DIVA.

A couple of months back, I blogged about Ms. Ford allegedly 'coming out of the closet' during an interview. (You can see the whole blog here.)

However, now she is saying the complete opposite. She claims that she never came out, and just spoke about how she didn't want to put a label on herself.

The article also pushed forward false rumors about Clemetine's private life with Kate Moennig (aka Shane McCutcheon) and twisted what she said about her work on The L Word.

She said of the article:

That Diva article also picked up quotes from a podcast interview I did with AfterEllen.com where the interviewer asked me if the sex on The L Word was real, and I very jokingly said, “Yes, we actually had sex. The L Word is porn. The secret’s out!” And the Diva writer printed it as fact that Kate and I had real sex on camera! I was like, “Oh, my God, I hate you!” I almost wrote a nasty letter and then I stopped myself because I thought, if anyone is stupid enough to actually believe that Showtime would let us have real sex, then that’s not my problem. So that was that. But it made me very angry.

So there we have it. Sorry to burst your bubble ladies... Still, whatever our Clem classes herself as, she's still beautiful.
Posted by lezstar at 17:19 No comments: 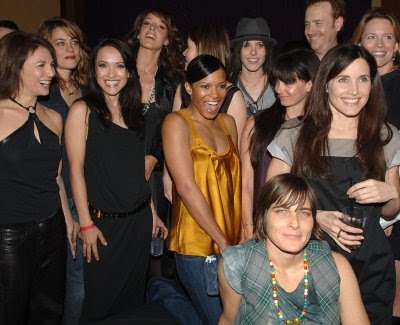 It's been almost a week since this headline hit the newspapers (sorry for the late post!), but I'm sure some of you guys and girls in the US haven't heard about it...

Apparently, after a group of students from a mixed race and gender school in East London, it sparked a controversial argument about whether 'Romeo and Julian' (a play about tackling homophobia, based on Shakespeare's Romeo and Juliet) should be allowed.

According to parents, they think it is ludicrous for 'such a literary masterpiece to be used as a basis for such a politically correct purpose'. Now, excuse me if I'm wrong, but shouldn't we be wanting to use well-known plays and books to put across today's issues so that the audience can relate to them?

Also, it was said that all parents want children to be learning 'Romeo and Juliet' and not 'Romeo and Julian'. Then tell me now why it is acceptable to teach children about suicide (which is not a part of every day human life - if you're emotionally stable, of course) but it is not acceptable to teach them about homosexuality (which is firmly a part of every day human life.)

Straight parents of the UK: the world is changing, get the f**k over it!

P.s. Sorry, gays, for posting such a gut-wrenching, vomit-worthy picture above. (Yes, I was deliberately trying to be heterophobic - which would cause absolute uproar if it were to be more mainstream. See how we feel hetties?)
Posted by lezstar at 16:17 3 comments: