I personally don't understand why, as Lip Service has always done pretty well in the ratings for a BBC Three show. 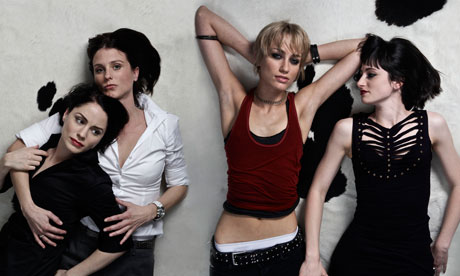 Alas, its true. Our favourite British lesbian show is no more.

Show creator Harriet Braun tweeted this to the fans:

Aw, man. I'll personally miss "shady" Sadie the most - she was damn hilarious!

I'm way behind on this tidbit: Laura left because she was cast in (another awesome show!) Homeland. However, she was replaced after the pilot was filmed.

Anyways, it will be sorely missed.

Which character will you miss most? Do you think Lip Service should have been picked up for a third season? Give me your opinions, I love to read them!
Posted by lezstar at 12:12

I liked Sam and unlike some other people, I really liked Tess and her mania BUT I have to admit, I am not surprised the show was cancelled. Besides the shock that was Cat's death, I found series two pretty predictable and the Frankie Dramarama was boring me senseless. I just don't think they managed to keep it fresh enough to continue.

I'm absolutely gutted. Once again that little representation we had is gone.

My favourite was Sam

I loveeee that show it was one of the best :( i liked sam :) . Did you hear that wont be another season of the real l world? I dont know if its true but i really really really love that show actually is my inspiration :( why all my favorites show are getting cancelled :(

I am pissed off that it was cancelled. It helped fill my L Word void...now Im down to lesbian music videos during my lunch break :(
I loved Lexy. Beautiful, smart and patient. I really fell for her character when she turned Sam's kiss down. It had to be hard to do but a woman who knows what she wants and makes you wait for it - INCREDIBLE! Then, when the time was right she satisfied Sam....and GAWD was it sexy!

I am very sorry to see it go. I really loved the Sam, Lexy, Tess dymanic. There such a long way to go with that. I hope another network picks it up. We are not as good as we used to be at campaigning to save our shows. But then again I think the BBC waited a long time to announce the cancellation on purpose.