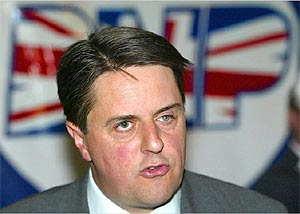 Dearest Lezstar♥,
Hereby I have the pleasure to let you know that I published “BNP? WTF!” in my Blog.
Thank you for everything!
Love,tender greetings,
Nadja

Actually I'm pretty sure she was implying that she found Nick Griffin vile, not heterosexual PDAs which would somewhat validate Nick's argument. What she actually meant is a much wittier response!