Check out how great the line up for Dinah this year is! 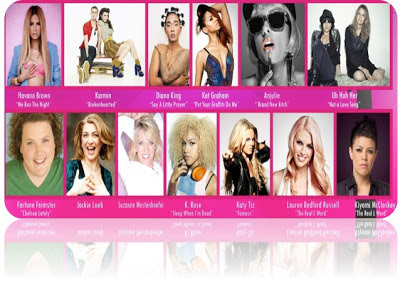 Palm Springs, CA - As women from all over the world will descend upon the famed California desert known as Palm Springs to attend Club Skirts Dinah Shore Weekend April 3-7 (www.TheDinah.com), all with different expectations, schedules, and friends, there is one immutable element that continues to link them all together: the music

This year, the 2013 Dinah Entertainment Roster delivers, as always, plenty of incredible talent, awesome bands, and groundbreaking artists ranging from pop to dance, and indie music to electronica, that make up one hell of a line up.

The world’s largest girl party/music festival will, for the 23rd year in a row, turn the city of Palm Springs into the ultimate entertainment hub, offering an epic slate of Top Ten Billboard headliners, rising pop stars, and celebrities.

They’ll be accompanied by some of the LGBT community’s favorite lesbian celebrities as OML Media Corporation (www.onemorelesbian.com) has confirmed the return of its ever-popular “Battle Of The Lesbian Web Series”.

This year The Dinah is introducing two inaugural events, hosting for the first time ever an exclusive “Celebrity Poker Tournament” on Saturday, April 6, with all proceeds going to the Human Rights Campaign (HRC). Stay tuned, as the complete list of celebrity poker players will be revealed on March 1.

Held April 3-April 7, 2013 in Palm Springs, CA, Club Skirts Dinah Shore – the original Dinah Shore Weekend - now in its milestone 23rd year is already on its way to be the biggest it's ever been.

Please note this is a partial List. For a full talent line-up and/or to purchase tickets go to: www.TheDinah.com

This line up cannot be missed, if you ask me!