So here's a theory I came up with. I've been debating it over and over (with myself!) on whether or not it could be true.
My theory is that everyone in the world is gay, but few dare admit it.

The reason I came up with this? Well just recently, I've been noticing the growing amounts of gay and bisexual people coming out, and was just wondering: maybe all people are and are just too afraid to say!
Crazy? Well, I was thinking, and maybe one rebellious person (there's always a bad guy in every story) wrote the Bible long ago, speaking of how man and woman were meant to be together, confusing all the new little people of the world. You know, Adam & Eve, yadda yadda yadda... Then from that day on, everyone saw homosexuality as something to be ashamed of, and became afraid to tell anyone of their same-sex attraction.
It could be possible! Don't knock it until there's proof... (Okay, I get that there is no way of proving this, just shut up and don't be picky.)
As for Christians, (or people of other religions who oppose homosexuality) they're so far in denial that they would never think about being with someone of the same sex in fear of doing their precious God wrong... Or would they? ;)
I understand that men have for centuries used women to breed their offspring, (I won't bore you with the whole 'the sperm and the egg' notion) but would God really have given us the ability to develop new humans in other ways - ie. IVF - if he didn't want the whole of the world to be gay? I seriously think it's conceivable that God himself is gay and we have the whole thing wrong: prop 8 should be questioning the marriage between a man and a woman and Christians should be questioning whether or not God would forgive people committing 'straight sex'.
I also understand that the sudden burst of people 'coming out' around me may just be because I'm getting older, more experienced at life etc... But just think about it: How great would the world be if it was just G.A.Y?!
P.s. Obviously, if you're 'straight' and reading this, you're gonna be sat there saying "What a load of bullsh*t, I know I'm straight!" But my theory also suggests that straight people are just too insecure and scared to admit their love of the same sex because we got it all wrong from the very beginning.
Posted by lezstar at 17:04 16 comments:

I realized earlier this week when I was reading UK lesbian magazine DIVA that I don't blog about Jill Bennett enough. Now usually, when you ask a dyke who her favorite all-time lesbian is, they'd probably answer 'Ellen!' or 'Rosie!' But to be honest, I'd have to say Jill.

So she's not as well known as Portia or Leisha, but she's high up on my own personal 'inspiration' list: she's talented - Jill played Michelle on season 3 of here! TV's Dante's Cove and the infectious Andrea on lesbian comedy web series 3way - she's absolutely gorgeous, and she actually cares about the world, in particular, one of my all-time favorite topics, gay rights.

Currently dating SheWired's Cathy DeBuono, Jill recently protested outside the mormon church that funded anti-gay proposition 8 for the way in which gay people are now classed as second class citizens in California. (Below.) This is just one of the many things Bennett has done for gay welfare, as well as sharing her life with the lesbian community - both on SheWired and AfterEllen.com - ensuring people everywhere that being gay really is ok. 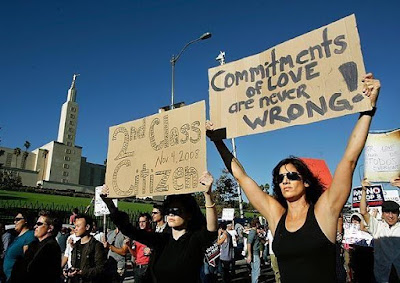 For constant personal updates on Jill, follow her on Twitter: twitter.com/jillbennett14.
Alternatively, click over to SheWired.com for Jill's current video blogs or go to her MySpace page at MySpace.com/JillBennett.

I personally think she's one to watch out for: she's certainly impressed me over the past few years.

Clem Does It Again.

I've blogged time and time again about the coming out and going back in of The L Word star Clementine Ford. But hopefully, this is the last time I'm going to have to mention Cybill Shepherd's daughter for a while because... CLEMENTINE IS ACTUALLY GAY!

And for real this time: we can officially label Ford a new addition to our list of celesbian friends.

I am gay. I just wanted there not to be this big emphasis on it. There are people who get it, and get what my original meaning was. Just as I was talking about storylines being a non issue on The L Word; it should just be these people are gay and it’s part of life. I think with that article, and what came across as ambiguity, was actually my attempt at making it a non issue.

So there you have it, the 'ambiguity' stops there. Welcome to the fold, Ford.
Posted by lezstar at 16:32 No comments: