So, lesbians. I'm not sure how many of you watched Queer as Folk (I certainly didn't), but great news if you were a fan of Thea Gill on the show: she's starring in the web series finale of 'Failing Upwards'! 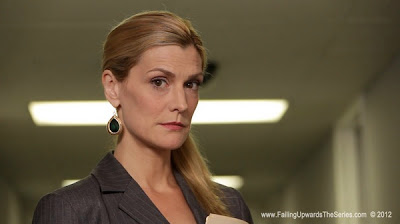 I did see Thea in the ultra-gay, ultra-camp TV show, Dante's Cove, so I know she's a legit talent... But what exactly is Failing Upwards, you ask?


"Failing Upwards" is a brand new feel good comedy web series about unemployment and the hilarity of finding a job…even if you have to lie to get one.

What openly out actors Michelle Bonilla and Matt Crabtree have created is not just another web series but a timely social series that creates comedy out of heart break, provides a chuckle to those who “pound the pavement” every single day, and most importantly show how little it takes to reverse some of the negative psychological effects that come with being unemployed and living off of "survival jobs".

Via the series' official website, they also gives back to the job seeking community by supplying online viewers with links to job source sites, discounts, tips, and relevant news topics of the day.


You can click HERE to see Thea in action OR right below this post, here on All Things Lesbian!