You read correctly: the awesome Hunter Valentine will be touring with one of the most successful pop-punk bands, Sum 41! 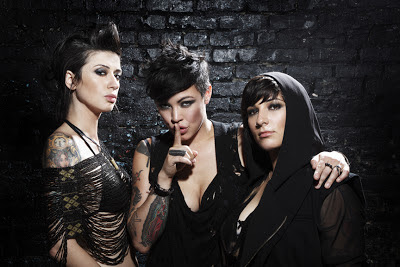 HUNTER VALENTINE is a band in nonstop motion.  From starring on Season 3 of Showtime's The Real L Word to the release of their third record, Collide & Conquer on Megaforce/Sony in October to a just-wrapped 6-week tour of North America, the ladies of Hunter Valentine are everywhere.  Now the band has announced a January West Coast tour with fellow Canadians SUM 41 which kicks off on January 8th in San Diego (tour dates below).

Formed when singer/guitarist Kiyomi McCloskey met drummer Laura Petracca in a crowded bar in their hometown of Toronto, the two quickly forged an unbreakable bond that has seen the band create three studio albums and tour over 200+ dates a year and includes bassist Veronica "Vero" Sanchez.  For Collide & Conquer the band teamed up with famed Canadian producer Greig Nori, best known for his hit-making influence on SUM 41 and Iggy Pop.  Nori turned out to be exactly what Hunter Valentine needed to hone their skills and craft a new record that packs a serious punch.  The release of Collide & Conquer has the band has turning up everywhere from the cover of Curve Magazine to Huffington Post to Revolver Magazine's Hottest Chicks in Metal issue.

Their first single, "Liar, Liar" has been burning up airwaves everywhere from Portland to Chicago to DC, and the song is a shining example of Hunter Valentine's distinctive, intense melodies and fiercely bold rock.  It's clear the band has arrived and is exploding into the mainstream.  Hunter Valentine have never been more primed to take the musical world by storm.

No word as to when the tickets are coming on sale yet, but keep a look out - don't miss your chance!

Check out my review of a Hunter Valentine gig HERE.
Posted by lezstar at 18:30