The Dinah Shore Weekend Reveals Its BIGGEST LINE-UP EVER!


THE BIGGEST LESBIAN EVENT OF ITS KIND IN THE WORLD! 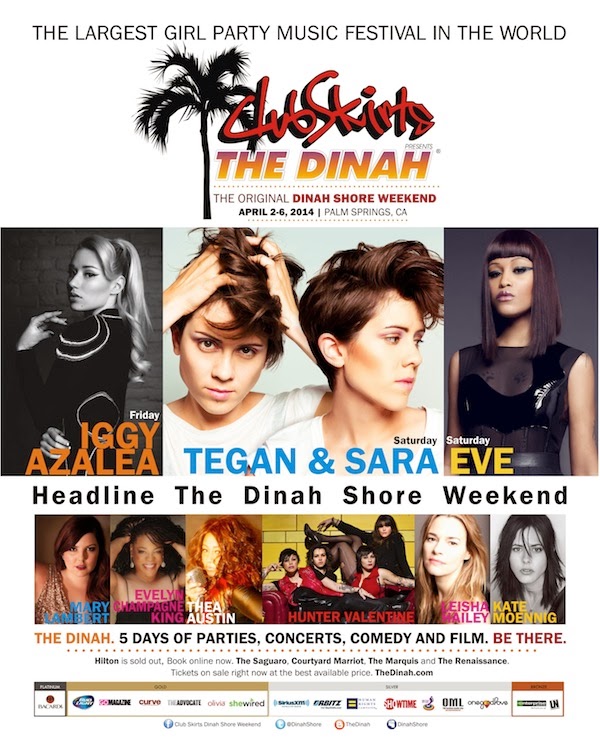 Celebrating this year its milestone 24th Anniversary, The Dinah is a one-of-a-kind destination where women of all ages, interests, ability, relationship status, cultural background and profession come together for one big giant celebration of the community.  A life changing experience offering lesbians the opportunity to express themselves, to be who they truly and gain a tremendous amount of self worth.

Turning this year again the city of Palm Springs into the ultimate entertainment hub, the 2014 Dinah Entertainment Roster delivers an epic slate of Top Ten Billboard headliners that make up one hell of a line up - one of the greatest in The Dinah's history.

Headlining this year is Lesbian cult favorites Tegan and Sara. The pop sensation duo will bring their “Heartthrob” world tour to The Dinah with an exclusive concert on Saturday, April 5 at "The Black Party" at the Palm Springs Convention Center. The twin sisters have been on an unstoppable meteoric rise since the release of their 7th studio album “Heartthrob” and the massive success of their lead single "Closer". Their Dinah performance marks the first time the pop stars perform at an all lesbian event.

Also headlining the "Black Party" is female rap titan Eve. The Grammy-Award winning rapper will perform her slew of music anthems including "Satisfaction," “Who’s That Girl”, "Gangsta Lovin’”, and "Let Me Blow Your Mind". Also set to top the bill at the epic lesbian party is hip-hop’s biggest revelation Iggy Azalea who will take center stage at the iconic "White Party", Friday, April 4 at the Palm Springs Convention Center.

Also coming back is The Dinah Film Festival presented by OML, held on Friday, April 4, at 8:00 p.m at the Hilton Hotel. Produced by award-winning filmmaker JD DiSalvatore  (the producer of Shelter, Marine Story and Elena undone, to name a few), the Dinah film Festival will showcase a variety of quality lesbian films including “Little Horribles”  "Nikki & Nora", "Kiss Her I'm Famous", "Dyke Central", and the short film "Secrets & Toys", among others.

New this year is the "Battle of the DJs" hosted by Dinah's resident DJs Lezlee, Asha, Lisa Pittman, Saratonin and Amara. The competition held over two-days will feature some of the best DJs on the West Coast!

If that wasn’t hot enough, did we mention the exclusive L Word Pool Party?

Hosted in association with Showtime, The L Word Pool party will be held on Saturday April 5 at the Hilton Hotel.

L Word iconic stars, Leisha Hailey and Kate Moennig will, respectively, step back one more time into their famed Alice Pieszecki and Shane McCutcheon shoes for an exclusive meet and greet hosted from 2:30pm to 5:00pm in the grand Ballroom.  As this year marks the 10th Anniversary of the official television debut of The L Word, Club Skirts and SHOWTIME are proudly commemorating the nostalgia of a memorable era in lesbian culture that celebrated out loud our “girls in tight dresses who drag with mustaches”!

The epic five-day world-renown weekend is already making a lot of noise and is well on its way to be the biggest Dinah EVER.

You'd never seen anything like it yet … this is going to be an unforgettable year!

For all the latest updates, the full Dinah 2014 schedule of events, entertainment line-up, as well as hotel information, tickets and VIP package options please go to: www.TheDinah.com