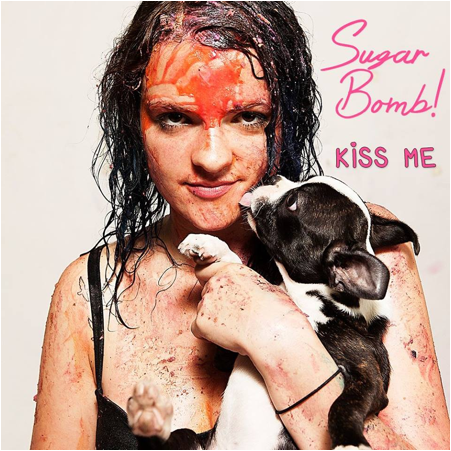 STREAM EXCLUSIVELY VIA UNDER THE GUN REVIEW: HERE

Former Bostonians, and newly Brooklyn based grunge pop trio known as Sugar Bomb! have not only been openly accepted by their new community, but have been a main focal point of new inspiration and life to the music scene.  Staying true to their influences of Hole,Paramore, Green Day, and No Doubt, the trio is proud to unveil their highly anticipated single “Kiss Me”.  In celebration, they will be supporting the release with a live performance at Arlene’s Grocery in Brooklyn, NY on March 4th with local friends, Ten Ton Man, Band of Young Saints, Near Peak and Dead Jetsetter. Purchase tickets HERE and join the event HERE!

Sugar Bomb! was founded by frontwoman and songwriter, Kat Hamilton and Drummer, Emmett Ceglia. The two met at Berklee College of Music and have an intense and chaotic chemistry that ignites the music. The band has since rotated through many lineups, but acknowledges that their core is Kat and Emmett.

The songs themselves are the juxtaposition of opposing ideas. Sweet and Sour, Angry and Positive with a hint of lyrical comedy. The most memorable Sugar Bomb! image is that of Kat Hamilton’s shiny pink pants, which she dons at every show. She says “I only wear the pants onstage, they are what transforms me from Clark Kent into Superman, and every superhero needs some fucking spandex”.

Frontwoman Kat Hamilton Comments, “We are pumped to announce the release of our second single “Kiss Me” off of the upcoming Sugar Bomb! Album. “Kiss Me” is a sassy, guitar driven ode to cunnilingus. There aren’t many songs out there that discuss or allude to same sex intimacy and we are very proud to have written and recorded a song that makes a statement. We will be playing “Kiss Me” at Arlene’s Grocery, Tuesday March 4th. The song is a crowd favorite and we have a feeling that you’ll fall in love with the carnal groove. I love that “Kiss Me” takes a time honored sexy Rock N Roll sound and applies it to people, like myself, who identify as LGBT. We will be releasing the “Kiss Me” music video before summer, which will be filled with lots of kissing and pie. Thank you for listening and check us out via these fancy links!”