You may remember all that time ago when I mentioned the new BBC drama, True Love. Well, I hope you do, because you have Alzheimer's if not. I only told you yesterday.

Anyway, last night saw the turn of Billie Piper (Doctor Who, Secret Diary of a Call Girl) and Kaya Scodelario (Skins, Clash of the Titans), who played out a lesbian romance between a school teacher and her student. 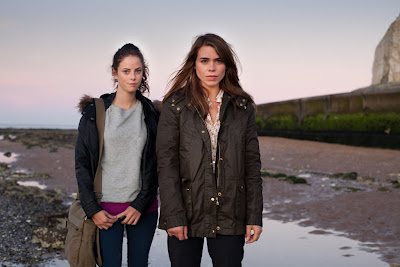 The first two episodes saw both couples you were rooting for end with a break up, but episode 3 did something television barely ever does: two women in love stayed together! That's right, no one died, no one went back to their boyfriends... BBC won my heart on this one.

Not only that, but both Piper and Scodelario acted extremely well. I wouldn't say this drama is for everyone, but growing up with a performing background, I could see the awesomeness of it.

Sometimes the writing and the performances were so realistic, it actually made me a little uncomfortable, just as I would be if these things were happening to me in real life. One specific part which really struck a nerve was when Piper's English students began chanting "lesbian" at her in a taunting manner. Really heart-wrenching stuff.

What I'm saying is, if you can, you should all watch it. If only just this episode. It's beautifully written and put together, although it may not be to some of your tastes.

The next episode's protagonist is played by one of my favourite British actresses, Jane Horrocks, who you may remember from TV's Absolutely Fabulous or, if you're as niche as I am, the wonderful movie, Little Voice. Jane won't be playing a lesbian, but if you're into phenomenal acting, I'd suggest you tuned in for this one!