Move over Sara Ramirez, there's a new lesbian Latina on the block. (Please don't really move over, Sara, I love you.)
We all watch Glee. And if you didn't before, you do now.
Now that there's a new, all singing, all dancing lesbian couple for you to ogle over. 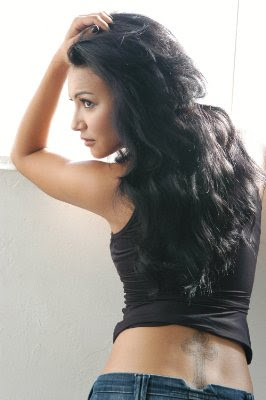 When I say 'couple', they haven't actually got together... Yet.
But Glee's Naya Rivera (who plays Santana Lopez on the show) is hot stuff.
I mean, look at any picture of her and she looks fucking steaming. (Hot, that is. Not drunk).
Anyway, it's not just that she's physically perfect that I love her. Just last week, Naya presented the GLAAD awards and did a darn good job of it. She had comedic timing, charisma and, of course, that gorgeous Latina face.
Not only that, but presenting the awards showed that Naya really does care about gay rights. She both plays a fictional TV character and also advocates the gays in her every day life. She speaks about her role as both rewarding and exciting and has openly expressed that she'd like her and Brittany (played by Heather Morris) to officially get together.
It really does appear that although she plays a bitch in Santana on-screen, off-screen she has a heart of gold. I mean, I love bad girls, but good girls are just as attractive sometimes. Take Naya, for example.
So that's why she's my crush of the week. She appears to be just a pretty face, but Naya is caring, loyal to her gay fans and a big ball of sweetness.
You can follow Naya on twitter at http://twitter.com/nayarivera.
Posted by lezstar at 09:29

'We all watch Glee. And if you didn't before, you do now.'