Bandanas, free hugs and wandering lesbians waving selfie sticks at Heather Peace… Yes, it can only be L Fest 2016. We had a blast. Our lovely, sloshy-sludgy British weather did not hinder our fun as we shuffled our gay tents and campers over to a drier field onsite at Uttoxeter Racecourse. Here, we began celebrating L Fest’s sixth year with a huge wave of music, arts and comedy shenanigans. 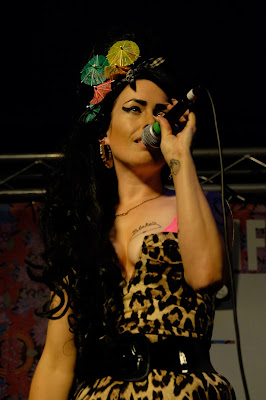 While Beth Prior and the loveable Eva Iglesias boomed their tracks from the Big Top, (restyled to ‘the Titty tent’ by artist BREE, patent pending) the Cunning Linguists’ panel featuring LGBT Poet Laureate Trudy Howson mesmerised with powerful words on the Arts Stage. Championing up-and-coming female LGBTQ+ poetry and literature is something L Fest is very passionate about. This year, author Sally Edwards launched her third novel and we were even treated to a reading by filmmaker and activist Helen Oakleigh. Elsewhere, we welcomed Wotever Film Festival, who shared some cracking lesbian film classics followed by discussion and Q+A sessions with the directors. Uttoxeter’s sun continued to glisten down upon us for our Del Mar Reunion Party, a chance for those who went to our annual L Fest Del Mar in May to catch up under a cheeky limbo line and of course, a sing-along with DJ Lady Heidi.

As well as our headliners, Heather Peace and Saffron from Republica, L Fest welcomed a lot of artists from overseas, including bold and bright three-piece band BREE from America and the lovely, blue-haired Aimee Francis from Australia. Saffron was an explosive presence on site during Saturday evening, even performing that classic we all know and love, Ready to Go. Heather Peace joined us on Sunday, popping over into the crowd, mid-set, to enjoy the buzzing atmosphere with her die-hard fans!

When not wearing our dancing shoes, we lost ourselves in the amazing comedy at L Fest this year. Our festival laughs truly began with entertainment by Lara King in her Opening Night Variety Extravaganza, which included McChicks from Holland and Aussies the Hussy Hicks. The Laughing Cows welcomed Jen Brister to the Main Stage, spinning us into the curtails of faecal-inspired laughter. Recounting stories of life post- and pre- the Schadenfreude of having twin babies, Jen also expressed resentment towards social media and all things selfie (insider - Jen did eventually get in our Green Room party snap.) As she performed, the arena quickly became packed with gaggles of giggling lesbians who could not get enough of the wittily observational Brister. According to one spectator, as much as a week later: ‘my face is still aching’ claimed artist Yvonne Dawson. 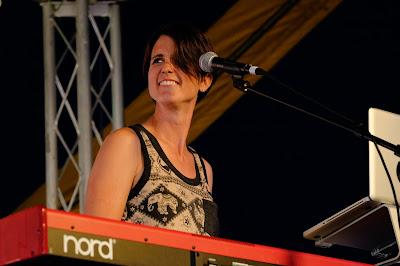 Elsewhere, by day, we were given a real treat by the fabulous Kenric Cabaret troupe, followed soon after by comedienne Jackie Hagan. Attracting a hefty crowd to the Green Stage Tent, everyone sat poised for her sassy, poetic discourse on important topics such as class austerity, mental health, disability and leglessness. In her poem, Tea and Coffee, Hagan humorously questions our notions of bisexuality in a binary-obsessed society. Now with a short on Channel 4 and a new book out, Hagan is certainly one to watch out for.

Now in its sixth year, Cindy Edwards claims this year’s festival was the best yet and promises big changes are on the cards for L Fest 2017. We are always striving to make L Fest an environment for all – including uniting LGBTQ+ families, which is why this year saw the launch of brand new kids’ workshops. Moreover, L Fest 2016 has once again shown the threefold world of fun, closeness and diversity that resonates year after year throughout the L Fest community. Post-festival, it is fair to say we are all experiencing an L Fest come-down. L Fest 2017 may seem a long way away – but FEAR NOT – we are already gearing up for the L Fest Awards, L Festive and expect a twist to Del Mar next year. Watch this space.
Posted by lezstar at 18:00