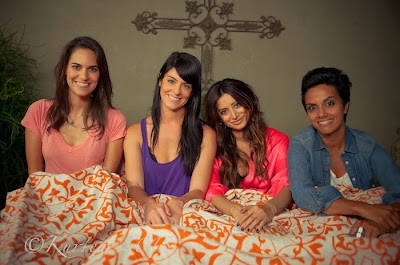 
Los Angeles, CA - It's official,  Filmmaker Rolla Selbak released today the season 2 trailer for Kiss Her I'm Famous.
Be the first to watch it right here on the new site: www.kissherimfamous.com.

Season will feature many surprises including the addition of actress Noureen DeWulf who is best known for her role as sexy therapy patient Lacey in Charlie Sheen’s hit TV comedy, Anger Management. DeWulf's character is definitely a troublemaker! She's described in the show as an evil disney princess. She's the grower of her own Kombucha and somewhat of a hilarious anomaly.

Selbak just wrapped the filming of the season 2 in Los Angeles and is now launching an IndieGogo Crowdfunding campaign for reimbursement of locations and equipment,:
Check out the Indiegogo campaign for details, and please do donate if you like what you see.  it ends on Halloween: http://www.indiegogo.com/projects/kiss-her-i-m-famous-season-2

The series returns on cyberspace in January 2014 on tellofilms.com, and will feature a total of 7 episodes.
Posted by lezstar at 19:00