Los Angeles, CA - The Human Rights Campaign (HRC), the nation's largest lesbian, gay, bisexual and transgender (LGBT) civil rights organization, is joining forces with Club Skirts Dinah Shore Weekend, the nation’s largest lesbian event. HRC is coming onboard as a full sponsor at the upcoming 23rd Anniversary of the largest lesbian event in the world April 3-7, 2013 in Palm Springs, CA.
Embracing the “party with a purpose” philosophy, for more than two decades, Mariah Hanson, founder and promoter of Club Skirts presents The Dinah, has relentlessly travailed to support LGBT rights.
And this year will be no different. Continuing her activist efforts to raise awareness among the LGBT community about marriage and equality rights, Hanson, who sat on the Board of Equality California for numerous years, is putting the focus on HRC to rally more lesbians around their endeavor.
As a national sponsor of the Human Rights Campaign’s Her HRC program, HRC will be hosting a special soiree during the weekend, giving Dinah goers the opportunity to meet, mingle, network and celebrate with their favorite celebrities and “celesbians”, and get involved with the HRC team in attendance.
HRC will also be present throughout the entire weekend with an information kiosk at all pool parties offering pamphlets and other literature to all attendees who wish to learn more about HRC’s efforts and/or join the movement.
In addition, Club Skirts Dinah Shore Weekend will be hosting for the first time ever a world-class Celebrity Poker Tournament on Saturday night (April 6, 2013) with all proceeds going to HRC. Participants will have a chance to join some of the hottest celebrity guests for a fun night of poker and charity to benefit HRC.
Club Skirts involvement with HRC extends beyond the actual Dinah Shore Weekend. Effective immediately, Club Skirts has generously donated an exclusive VIP package valued at $2500 to be raffled off at all Her HRC events around the country leading up to the Dinah.
“I am proud to name HRC as the charity we showcase at The Dinah 2013,” says Hanson,  “their work in securing our civil rights is as always to be applauded. I look forward to helping them gain more visibility with our unique Dinah demographic.  HRC was open to creating visibility in a fun way.  HRC gift items will be thrown from the stage during the weekend and we are creating a high profile celebrity poker tournament on Saturday night, with all proceeds going to HRC.”
As the largest civil rights organization working to achieve equality for lesbian, gay, bisexual and transgender Americans, the Human Rights Campaign represents a force of more than 1.5 million members and supporters nationwide — all committed to making HRC's vision a reality.
Founded in 1980, HRC advocates on behalf of LGBT Americans, mobilizes grassroots actions in diverse communities, invests strategically to elect fair-minded individuals to office and educates the public about LGBT issues.
“HRC is proud to come on board as a sponsor for the 2013 Club Skirts Dinah Shore weekend. While thousands of women gather to celebrate, it’s crucial that we remember the importance of being engaged politically as LGBT Americans fight for full equality across the United States. To this effect, HRC will have a presence aimed at engaging the Dinah audience with our organization and our goals,” says Margot Rosen, Director of Membership Outreach at HRC.
The road to Club Skirts Dinah Shore Weekend is always paved with good intentions!
Socially responsible, The Dinah sees to it that this “consciousness” permeates everything it does year after year. Stepping up its efforts with increasing effectiveness and productivity, its commitment to “give back” and advance goodwill has successfully translated into community activism, famously partnering with a variety of activist associations and charity organizations such as GLAAD, NOH8, Love is Louder, Equality California, and The Los Angeles Gay & Lesbian Center among others.
As the biggest All-Girl Party in the world, The Dinah also prides itself in giving back to the LGBT community remaining faithful to its “party with a purpose” theme to remind everyone that while we have made a lot of strides, we’re still fighting for our rights! 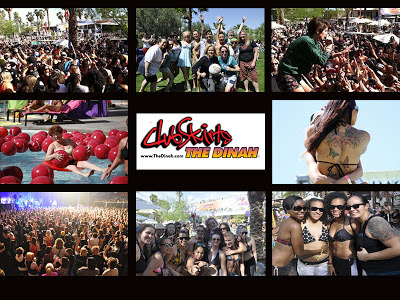 ABOUT HRC:
The Human Rights Campaign is America's largest civil rights organization working to achieve lesbian, gay, bisexual and transgender equality. By inspiring and engaging all Americans, HRC strives to end discrimination against LGBT citizens and realize a nation that achieves fundamental fairness and equality for all.

Club Skirts Dinah Shore Weekend (popularly known as The Dinah) is the largest lesbian event in the world.
Held annually in Palm Springs, CA, over a 5-day weekend packed with not only non-stop activities, spectacular comedy shows, live concerts, activism and legendary pool parties, but also premier talent in music, film and television, The Dinah provides women a life-changing experience.  It's an opportunity for Lesbians to escape for five days from the rest of their 360-day life of make believe, in the closet, and provides them the freedom to be who they are as well as gain an incredible amount of self-worth.

The Dinah also actively travails to support the LGBT community by championing social and political causes directly affecting it.
Over the course of these past 23 years, The Dinah has not only become one of the hottest celebrity hotspots but also a trendsetting event that entertainment industry insiders watch and jockey to book their artists’ performances. Artists who have performed at The Dinah include: Katy Perry, Ke$ha, Natasha Bedinglfield, Chaka Khan, Colbie Caillat, The Pussycat Dolls, India Arie, Chely Wright and Lady Gaga, to name a few.