An Interview with The Real L Word and Hunter Valentine Star, Kiyomi!

Hey you gays, its finally that moment you've all been waiting for: an interview with the absolutely darling and gorgeous Kiyomi! 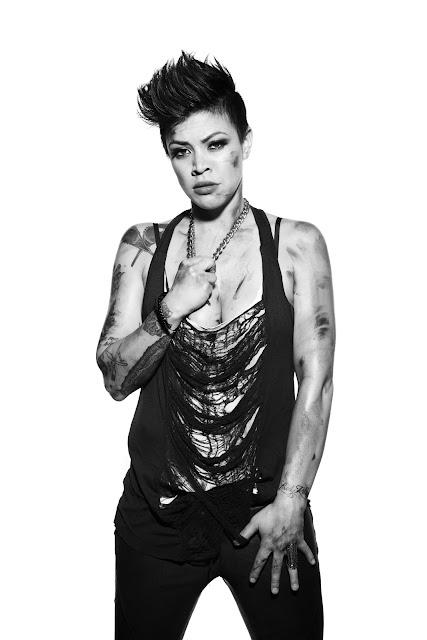 Let's not delay it any longer!


All Things Lesbian: When I saw Hunter Valentine live in Peterborough, Ontario, there was quite a small crowd. How has the rest of the tour been so far?

Kiyomi: The tour was actually very successful. I think that was probably one of the smallest dates we did on the whole thing. We sold out majority of the rooms across North America.

ATL: What can we expect from your new album, Collide and Conquer? Can you describe it in 3 words?

ATL: We saw the arrival of new band member, Aimee, on the Real L Word. Do you think she’s in it for the long run?

K: I would love to have Aimee along for the ride. She is an amazing musician and an even better friend. She’s is incredibly easy to work with and we are extremely happy with the addition of her in the band.

ATL: As a HV fan from the UK, I’ve noticed you rarely gig over there. Are there any plans for European dates any time soon?

K: We are trying to get over there as soon as possible! We have gone to Germany a few times, but never really spent much time in the UK. It’s definitely in our future plans.

ATL: So we already know you’re extremely invested in the band and spend a lot of time working. Do you ever have spare time and what do you like to do when you’re free?

K: I rarely have free time these days. I am a bit of a workaholic. When I am not doing band stuff, I am working on other projects. I have some acting stuff on the go and also the beginnings of a clothing line. In the free time that I do get..I love hanging out with my girlfriend, cooking, going to live shows and just relaxing in my home.

ATL: Let’s talk The Real L Word. If it gets picked up for a fourth season will you and your band mates be appearing?

K: We are still waiting on word from the network, so we will all just have to sit tight and see..

And some quick fan questions…

What is something you and Lauren want for your future as a couple? - @TheIslandLez, Canada

K: We want so many things in the future! I definitely want to have kids and Lauren shares that passion.

On a more serious note, Danielle from California asked: Do you think marriage is a possibility for Lauren and yourself in the future?

K: Marriage is also something that we think about already, but right now we are both very much focused on our careers and learning the ins and outs of each other. We believe you should know everything about each other before you make such a big commitment!

Do you have any favourite bands (except Hunter Valentine)? – Fay, Oklahoma City

K: I love the Distillers, Muse, Kings of Leon, Andrew Bird, Rihanna, Calvin Harris and the list goes on!

Kiyomi loves the Distillers? Right on!

What do you think about Kiyomi? So much nicer than they portrayed her on The Real L Word, am I right?

Great interview! I may have squee'd like a little girl when she mentioned a clothing line <3