Canada or the US?

I'm guessing, as most of my readers are of American origin, that most of you are screaming: WHOA WHOA WHOA, AMERICA IS SO MUCH BETTER.
However, I - a wholly British citizen - am on a much more unbiased debating ground and therefore feel I should express my opinion here.
"What does this have to do with gays and lesbians?" you ask. 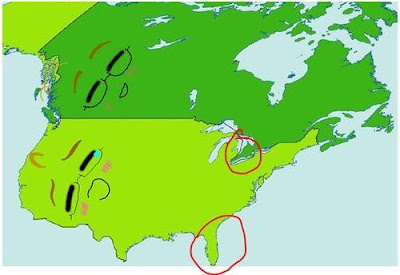 Well, the more literature I read about gay marriage in both Canada and the United States, the more I am pushed away from the US and pulled toward Canada.
Of course, we all know that gay marriage is legal everywhere in Canada, not just in 6 poxy states like it is in America. But there is more to the matter.
For instance, in the article I just read by Clifford Krauss, (click his name for a link to the article), he explains that once gay marriage was legalized in Canada, there was little concern or backlash against it. I mean, of course there was some when it came to super, super Catholic parts of the church, but it was nothing compared to the States.
Krauss writes "When Massachusetts' highest court ruled for gay marriage, the issue loomed over American politics." He also reveals how even the most democratic, liberal Presidential candidates vowed to be unsupportive when it came to homosexual marriage.
All this makes me think of how closed-minded America seems. A lot of the opposition against gay marriage's legalization wasn't even from the opinions of those Americans who were overly religious. Some of the opposition came from people who had just been 'brought up that way'. That is, brought up to hate, or at least dislike, gay people.
With Canada's current social and politic state, it seems relatively easy to conclude that Canada would be a much more welcoming place for gay people and their families to live.
However, I wonder if this is not the case, and some of the things I've been reading are misleading?
If you're from either Canada or the United States, please comment and tell me your thoughts on this issue. I am extremely curious, but to me, Canada seems to be winning here.
Please prove me wrong - or right!
Posted by lezstar at 16:46

Canada doesn't discriminate as much as the states...proud Canadian here :)
Big ups to Canada... Equality baby <3

Canada all the way, but like the United States, you're going to get a better experience in some areas than in others.

The bigger cities are definitely more welcoming for gay people than a small town, and some provinces seem to be stuck to lingering prejudices. While we definitely have more legal rights here than in the states, the attitudes in rural New Brunswick can be just as intolerant as a small town in the States.

As an American I often struggle w/ the desire to cross the border in order to have recognition and confirmation of our family which includes five kids. I hear the sentiment from many other gays/lesbians, too. However, there is a common fear of being discriminated against because we come from America. There may be no value in it, but many blogs/news stories talk about how Canadians have deep rooted anger w/ Americans and that makes it a hard choice. I'm ashamed that my country still doesn't show equality to all. I'm ashamed that I sometimes want to just run from it, which is so unAmerican, but really, why stay if we aren't appreciated as equals? Tough emotional turmoil that we should not know. So, on the topic of equality alone. . . Canada. I wish all Americans could simply be Americans (not categorized in 1st or 2nd class citizen status based on sexuality) and then, perhaps, I'd feel differently.

Thanks for the great comment, Cy! And don't get me wrong, I've just written an entire essay on Canadian anti-Americanism and I think it's ridiculous. I simply perceive their social legislation to be much more welcoming.

Your post is certainly intriguing and I advise that I bring a view from the conservative south of the United States.
One paramount difference between the US and Canada, I think, goes back to our early days of origination. We have to remember that the US was built on persecuted christian faiths that were unwilling to change their practices in regards to their forms of Christianity. Nowhere in the US is that ideal more highly regarded and still protected than in the south. In the conservative eyes, to be homosexual is to be promiscuous and atheist. Promiscuity and atheism is, of course, to be anti-christian. To be almost anything else (like a thief) is looked upon more as an intelligence flaw (being stupid) than an unfaithful act to God. Slowly the tides are changing here that show more acceptance of gays and lesbians, but make no mistake that those changes are coming from within. From LGBTs like myself that are "normal" Americans, except for the gay thing. We love our country, support our family, and keep our faith close to our hearts. We are changing one stereotype at a time...

I worked with any older, religious, woman for a time. We had great conversation. She was a very intelligent, classic southern grandmother who told excellent stories of times past that I just loved to hear. She realized one day that I was gay. She told me she did not wish to talk to me anymore and disagreed with me and my life. I told her that I respected her stance and her as a person (she certainly did not have to be my friend if it made her uncomfortable). We left it at that. Then, a few days later, she came up to me (to my surprise). She told me that she had thought about it, and she enjoyed having me as a friend. She realized that it didn't matter that I was gay and that I was still me. She never knew a gay person and just thought that homosexuals were terrible. But she knew me, knew I was gay...and obviously I wasn't a terrible person... And what she used to believe didn't make sense anymore. She changed her opinion of gays...To have 1 person change their view of gays... That meant a lot to me. 1 person.
We don't choose to be gay, just like they don't choose to be straight. Sometimes, it just takes time to change perceptions that have been blasted out into the world. Education of society and our families is always important. It will change.

I, of course, choose the U.S. Change comes hard to the U.S. But when it does, it is a beautiful thing and what our society has blossomed from. Lady Liberty tells the world that we will take your unwanted, poor, outcast, sick individuals...And we will make them great. We will be great. That opportunity is allowed to anybody, including LGBTs...And that will include marriage one day.
(Sorry for the late and long post :] )