"HOT AS L": THE L WORD STARS To Attend The DINAH 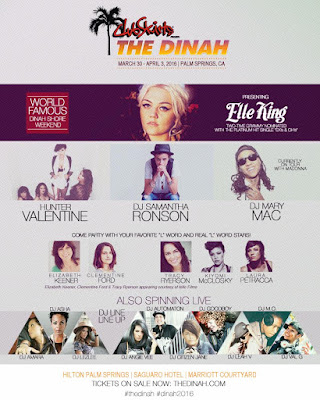 Palm Springs, CA – Club Skirts, in association with SHOWTIME, is thrilled to present “Hot as L”, one of the Dinah Shore Weekend’s signature events.

Bringing back the magic of Showtime’s hugely popular lesbian drama series and reality TV show, The L Word & The Real L Word, “Hot as L” will feature some of our community’s most beloved and popular stars including Elizabeth Keener, Clementine Ford and Tracy Ryerson.

Since the iconic lesbian-themed shows ended, they have all been keeping busy entertainment careers staying in the spotlight. Tracy Ryerson starred in both seasons of the hugely popular webseries “Kiss Me I’m Famous” directed by award-winning filmmaker Rolla Selbak fortellofims.com. Elizabeth Keener and Clementine Ford are now reuniting on the screen with starring roles in the upcoming tellofilms.comproject entitled “Skirtchasers”.

Both will be onsite throughout the entire weekend to promote their latest project as part of the Dinah Film Fest sponsored by tellofilms, which will showcase the finest in lesbian shorts, films, documentaries and webseries.
The exclusive event will also mark the farewell show of the all-female power pop/punk band and Season 3 cast members, Hunter Valentine.

Founding members Kiyomi McCloskey and Laura Petracca, as well as touring members Leanne Bowes and Lisa Bianco will take the Dinah stage for a special performance  - their scheduled last stop – to thank the fans for one hell of an amazing ride.

Hunter Valentine has captivated audiences with four successful releases, unparalleled energetic live performances across the world, and their unforgettable personalities on VH1’s Make Or Break: The Linda Perry Project and Showtime Network’s The Real L Word reality shows. Having announced their indefinite hiatus., the band is set to launch their EP, The Pledge, and embarking on the So Long For Now Tour for a last hoorah with their unwavering supporters.
SHOWTIME has been a long-time supporter of the LGBT community with programs like The L Word and The Real L Word®, and has developed over the years a close relationship with Club Skirts Dinah Shore Weekend. The Dinah served as the focal location for both series.

We all remember Shane, Alice, Jenny, and Dana eventful roadtrip to The Dinah, the biggest lesbian event in the world, in Season One. Likewise, The Real L Word shot episodes of Season One and Two at Club Skirts Dinah Shore Weekend and notably dedicated two back-to-back full episodes to the event in its third season.
“Showtime has been a great friend to the lesbian community and to The Dinah. We celebrate Showtime's legacy of promoting LGBT visibility and proudly welcome them once again as a premiere sponsor of The Dinah.
The actresses attending are some of the shows’ favorites and will be on hand throughout the weekend to join in The Dinah festivities,” says Mariah Hanson, founder & producer of The Dinah.
The epic five-day world-renown weekend is already making a lot of noise and is well on its way to be the most epic Dinah EVER.

… this is going to be an unforgettable year!
###

For more information and/or to purchase tickets go to: www.TheDinah.com

For info about Hunter Valentine and So Long For Now Tour Dates go to: http://www.huntervalentine.com

For info about tello go to www.tellofilms.com