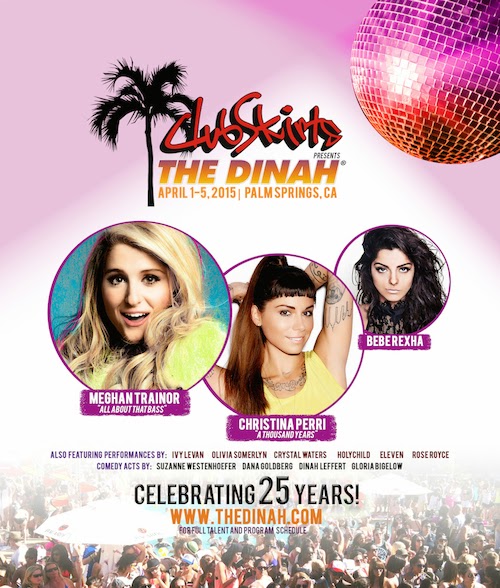 Meghan Trainor and Christina Perri
Headline The Dinah 2015
Palm Springs, CA - April 1-5, 2015 the legendary Club Skirts Dinah Shore Weekend is turning twenty-five and taking the event to a new zenith.
A quarter-century ago, Mariah Hanson did more than just kick-start her Dinah. She also and most importantly launched what would become her enduring legacy to both the city of Palm Springs and the LGBT community.
From a small, one-night event at a Palm Springs museum with 1,500 participants twenty-five years ago, to booking lavish locations at deluxe hotels over five days of epic pool parties and world-class entertainment, The Dinah has evolved into one of Palm Springs and the Coachella Valley’s largest tourism boosters.
Today Club Skirts Dinah Shore Weekend rallies some 15,000-plus attendees not to mention major corporate sponsors, and has cemented its status as the undisputed biggest lesbian event of its kind in the world.
A cultural phenomenon that has not only reached epic proportions but has as well continuously been transforming lives and making a difference in and for the LGBT community. The Dinah offers an unparalleled one-of-a-kind experience for myriads of women who come every year from all over the world to enjoy the freedom to be who they truly are, and gain, as well, a tremendous amount of self worth.
And 2015 will be no different!
Now ready to soar to new heights, the 25th installment of The Dinah is already expected to be one of the major highlights of the 2015 Palm Springs festival season.
The ultimate MUST-SEE, MUST-EXPERIENCE DINAH EVER that is once again delivering a spectacular slate of legendary headliners, rising pop stars and celebrities.

Pop sensation and 2015 Grammy nominee Meghan Trainor known for her infectious hit “All About that Bass” headlines the Dinah during the Black Party held Saturday, April 4 at the Palm Springs Convention Center.

Also set to top the bill at the epic lesbian party is international Billboard Top 40 superstar Christina Perri, the extraordinary voice behind the hits “Jar of Hearts” and “A Million Years” who headlines the White Party on Friday, April 3 at the Convention Center. Joining them are pop music’s new “it” girls Bebe Rexha and Ivy Levan.

On the comedy front, “The Dinah Comedy Night” hosted by Suzanne Westenhoefer will be headlined by Dana Goldberg, Gloria Bigelow and Dinah Leffert.

The non-stop action, the house-packed crazy wild Pool Parties, the sexiest Go-Go dancers, the best DJs, the spectacular entertainment, the celebrities, plus the hottest girls in the world, the epic five-day world-renown weekend has it all!

The Dinah has certifiably come to represent an ever-growing movement that has crossed over to mainstream bringing more and more visibility to the lesbian community - one that had never existed before.

Watch The Dinah 2015 Promo Video:
https://www.youtube.com/watch?v=3TtTaxALUiI&feature=youtu.be
Posted by lezstar at 19:00