Female electro-guitar duo, discoBAASSIK (dB) will be playing two shows during Brooklyn Pride weekend.
·  The first will be on the main festival stage located at 5th Avenue and 4th Street in Park Slope at 1pm on June 8, 2013 where they will perform their party hits "Lickety Like" and "Bag You".


·  The second wil be at Trash Bar in Williamsburg Sunday, June 9, 2013 at 9pm for a full 45 minute set displaying the wider range of their music. 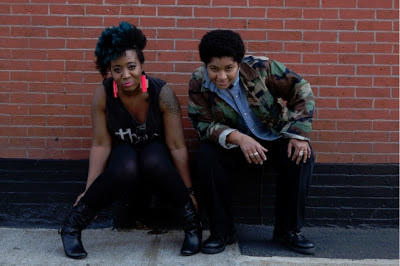 The dB sound can be described as a blend of Floetry, Missy Elliot with the occassional gritty rock edge. Audiences will witness the live electronic effects and guitar solos that carry both fun and meaningful lyrics.

If you'd like more info about dB or to arrange an interview, just let me know.  If you'd like to send a writer to review the show at Trash Bar, I will put you on the list at your request.

Brooklyn based guitarist and bassist, SKY DISCO and BAASSIK (pronounced Basic) are both accomplished musicians in their own right. The duo met while working together on a rock gig.  After the gig, they found a musical synergy with each other and formed discoBAASSIK (dB).  When they realized that they were both ridiculous "gear headz" they joined their gear together to push it to the limit.  So the music you'll hear, is their own soul/funk/rock from deep down inside -- mixed with the desire to stretch the limits of their electronic equipment. Collectively, they have graced such New York stages as Lincoln Center, Joe's Pub, Santos Party House and many more. Nationally, they have had performances in Los Angeles, Washington DC, Pittsburgh, and at Pride festivals in Baltimore and Newark, NJ.   Currently teamed up with Reveller Records, dB is quickly gaining momentum in the indie and electronic music scene. Their first EP, titled "Electron-Chics" is available for free download on Bandcamp.

Finally, another lesbian blog! Do you know about anyone else who is bloging, all lesbian of course?