If you're a fan of Grey's Anatomy, (or not a fan, but spend the majority of your day googling 'Calzona' or 'Canzona fanfic',) you'll know that the show is home to one of the best lesbian couples of all time. 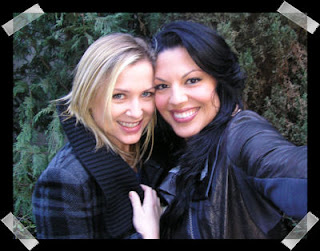 Callie Torres and Arizona Robbins make up this dynamic duo, but gossip tells us that something baaaad is going to happen this Thursday evening when Grey's airs.
Previews have been issued to a select few, with one viewer saying:

There’s a giant bombshell dropped in the middle of Callie and Arizona’s relationship. I literally gasped and then yelled at my screen when I found out what it was. OK, make that TWICE. I yelled at my screen TWICE. If there’s one reason to watch this episode, this is it.

EEK! Sounds exciting, right? WRONG! It sounds f*cking awful! I'm thinking of all the worst situations it could be and I am not happy with it. They can't break up again, surely?!
So what do you think this 'bombshell' will be? Will they overcome it? And are you excited to see what it is!?
Posted by lezstar at 07:19

I have no idea what's going to go down on Grey's this week. But I DO know that someone tweeted Shonda Rhimes saying "if u allow calzona to have a happy relationship i will name my daughter after you" to which Shonda replied "then get comfortbale with the name..."

I'd guess the "date" between Arizona and Mark might have had something to do with making Callie's wish to have a baby happen?? Thoughts?

NOOO, does anyone know if this leave to Africa is a permanent move??

They made Arizona move to Africa bcos is the real world she gone for her maternity leave..she'll be back..no worries..