Since I know a couple of newbies to the 'lesbian fold' (and no, I don't mean Clementine Ford) I thought I'd blog a couple of clichés signature to lesbians, just to get their balls rolling. Balls? Hypthetically, of course.
Cliché numero uno: Wrist Cuffs.
That's right girls, wrist cuffs aren't just for guys, they're a great giveaway when spotting hot girls out there. Usually leather, the wrist cuff is worn casually with jeans and a vest, à la Jill Bennett. (Check out her left wrist!) 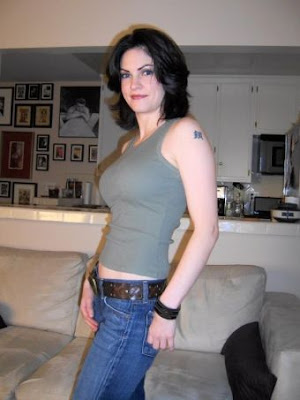 Clearly, they look sexy, especially when you look like Jill...
Cliché numero dos: Chapstick.
No, not because Katy Perry says her 'conquests' wear it. Long before she ever even thought about kissing a girl, we were kissing girls wearing this baby:

There are loads of different brands and it comes in more flavours than Slurpee, which is why we love it! It's small enough to fit in your pocket while you're chatting up the new girl in the coffee shop and it's quick and easy to apply. (Oh, one thing KP did get right: it tastes SO good!)
Cliché numero tres: Cats.
Yeah, so lots of people like cats, gay or straight, but lesbians seem to have some strange obsession with them.

Aww look at it's little eyes! *ahem* That's right, I am no exception to this rule: cats are cute. You'd be hard pushed to find a lesbian with a dog - or any other animal for that matter. Mostly, I'd say it's because they require less attention than dogs and smell much worse. Plus, it's much more comfortable to be sat on by a cat than a dog.
Anyway, Jill Bennett has 2, Willow and Tara had one and I'm pretty sure if I broke into Ellen & Portia's house in the middle of the night, I'd be attacked by one of their super-furry friends.
Cliché numero cuatro: Teva's.
So not every lesbian has a pair, but Teva's are signature to lesbian feet. Just look at them!:

So you wouldn't find them on a femme, that's for sure, but older, butcher lesbians everywhere are seen wearing these.
Cliché numero cinco: Merging the names of a couple to form one collaborative name.
"Huh?" is probably your first reaction. But you'll understand what I mean in a uno momentum. (Excuse the Spanish, I just have Sara Ramirez in my head... If you know what I mean... ;])
This refers to taking the names of 2 lesbians in a relationship and combining their names. For example, take The L Word golden couple Bette & Tina.

Ahh, that picture reminds me of my girlfriend and I. *sigh*... Sorry, back to the point...
Most lesbians will know that Bette + Tina = TiBette. Not to be confused with Chinese plateau Tibet, of course.

Excuse me, I'm going off track again, hah! Anyway, friends of lesbians always merge their friends' names to create one. Another example would be Callie + Arizona = Calzona. (Referring to Grey's Anatomy, obviously.)
I don't know why lesbians in particular do this... Possibly because gay marriage is still only legal in 5 states (ed's note: yay for Maine!) and the majority of us still can't take the name of our loved one in holy matrimony. Pssh.
So that's it: our first 5 lesbian 'clichés'. What would you like to see in the next post, oh experienced lesbians?
EDIT: Okay, okay, so maybe we do this for all couples. But doesn't anyone else think that lesbians do it to the maximum?
Posted by lezstar at 15:17

and don't forget the ties...

Seriously, Loz, that was AMAZING. You are *such* a talented writer!

I think a fantastic cliché to get into part 2 would be the whole 'Lesbian MUST = Butch'. What better cliché can you get than that? ;p

But yah, I liked this one mucho! I WANT MOAR!

hah, why thank you Matt! You are a verrr talented one yourself!
YES, that is an obvious one, I'll include that.
p.s. I love the way you spell 'more' :D

aren't shipnames (combining names) a common thing outside of the lesbian world too?

http://www.madnike.com is a professional online shop ,nowadays ,the productions in our shop is in promotion.

Wholesale shoes of nike ,jordon ,puma,adidas,all the series you can have,at low price .fashion high-heel shoes,UGG,Channel,PRADA,GUCCI and so on,you can save 80% at least . you can find all the series of them.

To the point , free shipping.
Welcome!

I liked, although I must say that merging names is really common outside of lesbians too.

Brangelina, Bennifer...
then there's the fictional such as Addek, MerDer, etc.

I don't think we can take the credit for that one L!

also, Bridget had a dog.
I feel the need to point that out...

Yes Rosie, I get that you like to be right all of the time, but it was just a light-hearted blog with some generalisations. Calm down. :)

haha
sorry love.
it's just that when I think of something, I have to say it.
I should maybe have this checked out.

I liked the blog, even if it may not appear that way! "/