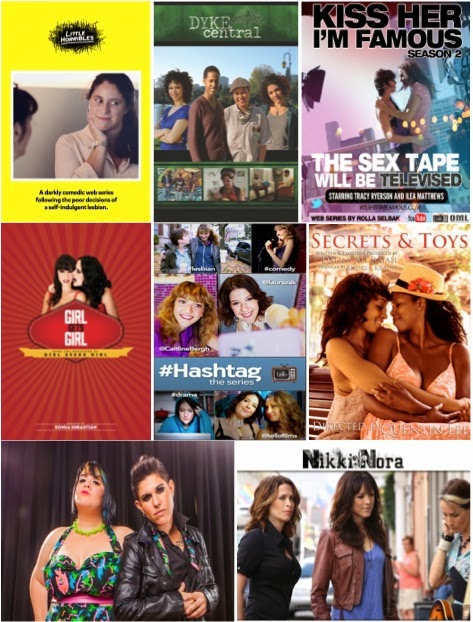 Palm Springs, CA – Club Skirts Dinah Shore Weekend, in association with One More Lesbian (OML), have announced the official selection of lesbian-themed projects that will be screened at this year’s “Dinah Film Festival.”

The Fest, which debuted last year to immense success, is set to return this year again at the Palm Springs Hilton Hotel on Friday, April 4 at 8:00pm offering attendees the chance to preview a slew of unique and original programs.

The 2014 Dinah Film Festival will showcase five web series, and present three exclusive world-premieres featuring a short film, a documentary and an exclusive advanced trailer.
The categories are as follow:

Dyke Central is an Oakland-based dramedy that centers around 30-something butch roommates Alex and Gin. Surrounded by a diverse group of friends who guide, challenge and support them, Alex and Gin struggle to adapt to change and create balance in their lives without losing themselves.

#Hashtag: friend Me. Follow Me. Like Me. Fall for Me. #Hashtag follows the love lives of two technology-obsessed friends in Chicago. From Instagram seduction to inappropriate selfies, Twitter over sharing to OKCupid dating, Liv and Skylar are about to learn the real-life consequences of over-indulgence in the virtual world.  The show stars Marnie Alton (Exs & Ohs, Cowgirl Up), stand up comedian Caitlin Berg and actress/writer Laura Zak.

Little Horribles is a new web series that follows a single lesbian (Amy Rubin) as she navigates her thirties in Los Angeles. The show, created by Amy Rubin recently made Variety’s list of “Top Ten Best Web Series of 2013” impressively ranking at # 4.

SHORT FILM
Secrets and Toys is a delightful short film where a surprise visit, a bumbling bestie, and many years of tight-lipped deception cause EVERYONE'S ish to hit the fan. The chaos caused in this comedy of errors is full of sexy moments and tons of laughter. Secrets and Toys will warm your heart as you root for the lovers to make it through the storm.
Starring Dalila Ali Rajah (Cherry Bomb, Grey's Anatomy, New Girl), Shelli Boone (Saints and Sinners, Entourage), Diane Sellers (Rules of Engagement, It's Always Sunny in Philadelphia), Darryl Stephens (Noah's Arc, Hot Guys with Guns), Doug Spearman (Noah's Arc, Old Dogs & New Tricks), Jill Bennett (Second Shot, Dante's Cove), among others.

DOCUMENTARY
God-Des and She Documentary follows the music duo God-Des and She as they return to their mid-west roots to attend a family function and to perform at a pride concert.  The duo talk about how they came to collaborate, their family and what their 2006 performance on The L Word has meant to their career.  A hip-hop/pop/soul duo bred in the Midwest, God Des & She now play to packed venues all over the world from New York to Sweden.

TRAILER (Exclusive premiere)
Girl Gets Girl is a feature film from the creators of the popular Chica Busca Chica (Girl Seeks Girl) series. A romantic comedy that tells the story of Nines, the restless lady-killer, coming back home from the States. Nines has tried to reinvent herself in Miami but it hasn´t worked as she expected. Nine years after leaving Spain she decides to go back home and win Carmen´s heart. The only problem? Carmen is straight and lives with Mónica the woman Nines left their wedding day. The film is directed by Sonia Sebastian.  Stars include Celia Freijeiro, María Botto and Adriana Torrebejano
The Dinah Shore Film Festival was launched last year as a way to promote the work of talented independent filmmakers and to show a glimpse of lesbian culture. Supporting filmmakers and film is important for Club Skirts’ founder and producer Mariah Hanson.
“I was thrilled with the success of last year's film festival. We've expanded the format to include a wider variety of all types of films and are donating 100% of the proceeds to our filmmakers,” says Hanson. “I know this will eventually become one of the more popular events at The Dinah. We plan to continue to offer more wide ranged programming so that women from all backgrounds and interests can experience the lesbian pride and visibility of The Dinah.”

The Dinah Film Festival is a two-hour event. A special Q&A with the filmmakers will follow the screening.
100% of the proceeds from the event will be donated to all participating independent filmmakers.

For more information go to: www.TheDinah.com