'And Then Came Lola' Movie Review

Do any of you dedicated readers remember way back in 2008 when I blogged about the 'And Then Came Lola' promo picture?
Well, now you do. 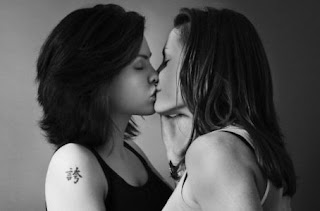 And I finally took the time out to watch the movie!
My cousin bought me it for my birthday and I got round to watching it the other day. I'd usually review this on the review site I co-own, but I felt I'd be doing you lesbians a disservice if I didn't review this film here.
To be honest, I had one bad thing to say about the film - it wasn't long enough! At only around 70 minutes long, it left me feeling like I had just watched an episode of Charmed, rather than a feature film. Dammit!
However, any that Jill Bennett does is magical to me - she can do no wrong!
Cathy DeBuono and Ashleigh Sumner also co-star and do an awesome job.
My favourite part? The freakin' HOT sex scenes. Oh, and Jill's boobs. I mean face. (Maybe.)
The acting isn't exactly Oscar winning, but frankly, I don't give a shit. The film was awesome and there are segments of animation which are both humorous and entertaining.
Loved it.
Not sure it'll be as praised as Imagine Me And You, but it'll definitely become a cult favourite.
Posted by lezstar at 20:35

Never was a fan of IMaY. Lola is much more of an authentic feeling movie, even if it isn't polished, IMaY felt fake, as a Brit, the football chant hurt my ears (please don't ever cast an American to do that again). It is a well known fact that Americans cannot pronounce wa@Ker properly, evidenced by the Americans on 'Buffy' who, despite their flawless English accents couldn't pronounce wa@Ker worth a damn.
Also, as a person who has a Poly relationship and knows it is perfectly possible to love more than one person at the same time, the mono mindset of the film hacked me off. Mind you I just can't watch love triangle films/stories any longer.

I started watching it but the animation parts turned me of, completely.