***WARNING GLEEKS: SPOILER ALERT***
As you may or may not know, there's a constant lesbian 'ship', as tumblr addicts call it, within teen comedy/musical TV show Glee. 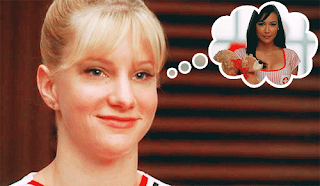 Yep, if you're a 'Gleek', you'll know of this non-lesbian love that's been hinted at since series 1.
With Jane Lynch playing an officially straight character on the show, lesbi-gleeks - and straight people! - everywhere have been routing for Brittany (Heather Morris) & Santana (Naya Rivera) to get together and have been optimistic ever since this infamous quote:

Santana : Sex is not dating.
Brittany : If it were, Santana and I would be dating.

And, although this is probably old news by now, for you late coming lesbians: BRITANNA ARE ON!
But how do we know that this is not just some rumour? The show's producer, Brad Falchuck, tweeted this earlier on in February:

Who's Gwyneth? I'm pretty sure all of you who don't follow the show are asking. Well none other than Gwyneth Paltrow, of course!
Stay tuned for more info and possibly an opinion or two on how the producers and writers handle the teen romance. With them doing such a good job with Kurt (Chris Colfer) on the show, we assume that Glee will not do the LGBT community an injustice.
So, who's excited?!
Posted by lezstar at 12:39

Hell yes!! Naya Rivera is smoking hot. And thankfully I can say that, because although she plays a teenager, she is of age in real life. Bring on Britanna!

Of course there is always the worry that they would not treat women's bisexuality or a lesbian relationship as valid and respected as the Gay male and his identity and relationship. Glad to hear that this might not be the case.