Melissa Etheridge splits up with her girlfriend

Okay, okay, I get that they were 'married' and I should have put 'wife' in the title, but you know how the American marriage system sucks for gay people? Yeah. That's why I didn't. 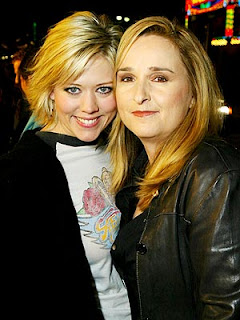 You may be thinking 'why do I care about these 2?'
Well, a) Melissa Etheridge is a folk singin', toe tappin' Queen and b) these pair were generally one of the most high profile lesbian couples around.
According to Tammy Lynn Michaels' (Etheridge's now ex-girlfriend) blog, the two have been on
the rock since January.
Huh! Who'd have thought it?
Anyway, it seems as though there's no official reason for their break-up as of yet, but the couple were together for 9 years and 'married' for a further 2. They also had twins, carried by Michaels, and Etheridge overcame cancer during their relationship.
Doesn't it suck when 2 people who seem like the happiest couple in the world actually aren't?
Posted by lezstar at 14:31

It is so sad when anyone breaks up but especially these two,as they were the "great American Lesbian picture of LOVE". What I don't understand if they have 2 children together and were only having trouble since Jan.... why did they not go to counseling and try working on it- hell, they dated longer than that before they got married- why not try to work a little harder.?

not only does it suck, it's down right scary. it makes u wonder what else could go wrong that u thought was solid..